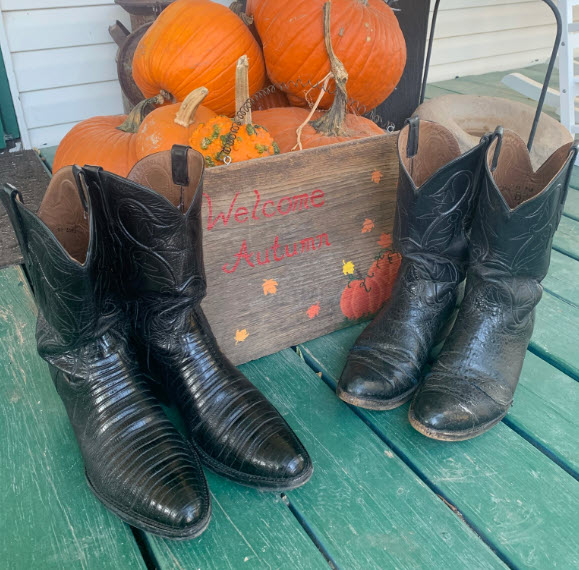 Many people think if they buy a high quality pair of exotic cowboy boots, that they'll be able to pass them down to their kids or grandkids. Is there any truth to this? Well, yes! But also no. Let's dig into this!

Like anything in life there are variables. When Black Jack was still a young company, my Mom bought my Dad, Stephen, a pair of exotic boots as a Christmas present. Some simple and lovely cowboy boots. They're black Teju Lizard boots which are nearing 20 years old. (We think that they're 18 years old.) Today Dad still wears them regularly, and they still look like great dress boots! On the other hand, Dad has a pair of navy blue Bullfrog boots which are nearly the same age. They're not really used anymore because they're tired and worn out. Same person wore them. They're about the same age. They are both extremely high quality hand made Black Jack boots. So what is the difference between the two pairs?

Different hides are used differently to make boots. For example, the Bullfrog boots are a pieced leather because the hides are small. The first place those gave out was at the seams in the vamps. Just the simple fact that leather and nylon thread move differently caused the boots not to last as long. Teju Lizard boots are typically, though not always, made from a single piece of hide. They're not usually pieced together because for most boot sizes they're big enough to do it in one piece. This is one major difference.

How you wear them

In the example of the Teju versus the Bullfrog, there's another substantial difference. Dad wore (until they wore out) his Bullfrogs to any casual or semi-formal event he could. They weren't work boots, but they were worn a lot! The Teju boots on the other hand, were only worn Sunday to church, and for formal events. The Bullfrog boots lasted 10 years used as semi-formal and casual wear, but the Teju boots are still a stunning formal wear piece. How they're worn makes a major difference in how they'll last.

When you have high quality, all leather boots (or shoes for that matter, but why wear shoes in Texas?), they're just that. They're all leather. They need to be cared for as leather. They'll need to be kept clean, dry and conditioned. We at Tim's Boots recommend Bickmore products, but Bickmore isn't the only one out there. We're just of the opinion that they're the best. When you daily wear a pair of leather boots, they really should be conditioned at least once a week. When you have a weekend pair, 2 weeks or once a month would be sufficient depending on how much you're wearing them.

So, will your boots last a lifetime? When I worked for Black Jack for a year in their quality control, I saw probably once or twice a month a pair of alligator boots get resoled that were made in the early 90's. Is it possible to have your boots last 30 years? Absolutely! Baby them. Don't wear them hard, and keep them for special occasions. Have multiple pairs so you can rotate them and not always work the same pair of boots. Another reason Stephen's Teju Lizard boots have lasted so long is also because he has 6 other pairs of exotic dress boots. They get rotated, and each gets worn 2 times a month roughly, and each gets conditioned monthly and cleaned after each wearing. The magic answer? Care!